The Sahel on its way to Syrianization

The Sahel has been at war for ten years, but never has the situation been as worrying as it is today, even if there have been dark years like 2019. The reality is such that the collapse of Burkina Faso can be envisaged, while in Mali, its "somalization" continues. Even more seriously, the Islamic State is strengthening in the so-called Three Borders area with a massive arrival of foreign fighters from the Middle East. A "Syrian-style" scenario with the establishment of a caliphate is therefore not a pipe dream. In the face of this threat, the silence of Sahelian governments and their partners is disturbing. This silence is all the more worrying in that no strategy has been put in place by these same actors; it is the reign of flight ahead, of blindness, of denial and also of cynicism... 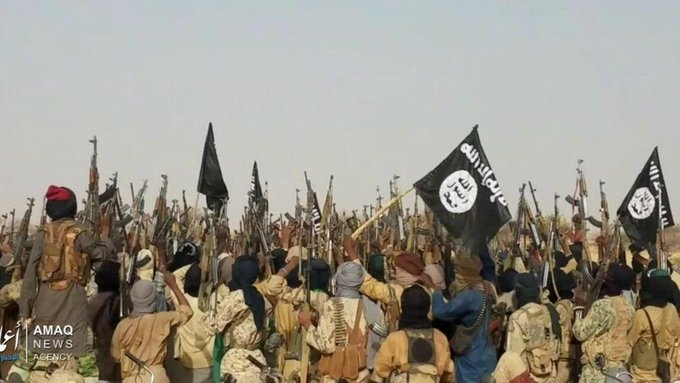 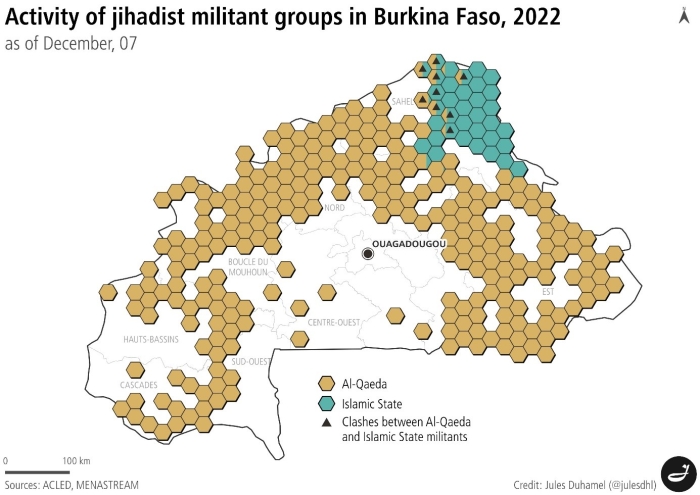 Activity of jihadist groups in Burkina Faso as of December 7, 2022. In yellow is the JNIM, an organization led by Iyad Ghali, and in green is the Islamic State, which has just pledged allegiance to the new caliph, Abu al-Hussein al-Qurashi.

The maps speak for themselves: the Burkinabe authorities control at best 40% of their territory. The coup d'Etat of September 2022, with the arrival in power of Captain Ibrahim Traoré, changed nothing, except to further disorganize an already decaying army. The only real initiative taken by the new government to try to reverse the situation is the call for the enlistment of 50,000 Volunteers for the Defense of the Fatherland (VDP). How can these civilians, with 14 days of training, succeed where a professional army has failed? This measure looks more like a headlong rush, a last-ditch attempt to regain lost territory. And the risks are great. Previous governments had excluded the Fulani from recruitment to this self-defense group, which had committed and, according to Burkinabè sources, continues to commit, alongside the defense and security forces, numerous serious abuses against these populations. The danger of large-scale community clashes is therefore real. Moreover, in early December, the JNIM published an alert message to the Head of State and the population warning all those who would target "the Mujahideen". The VDP will therefore be in the firing line, with significant loss of life, given the presence of the organization led by Iyad Ghali, who has a great deal of pleasure in setting himself up as the defender of the Peuls, thus amplifying their stigmatization.

Still looking for solutions, on December 7, Prime Minister Apollinaire de Tambèla traveled to Moscow. The purpose of the visit was not made public, but rumors suggest that the Wagner group will be arriving soon. The Malian military, which facilitated the meeting, is said to be pushing for this option in order to break out of its isolation, and some officers who see the wall coming closer are said to be in favor of it. But where will the Burkinabe authorities find the money to pay this private military company, when they are already looking for funds to pay and equip the 50,000 VDP? Not to mention that a Russian presence in Burkina Faso would mean that Ouagadougou would lose all the French, European and American aid it so badly needs to deal with the humanitarian emergency. Internally displaced persons now represent more than 10% of the population. Finally, it is not 1000 or 2000 mercenaries who will succeed in bringing security and lost territories back into the fold of the State. At this stage, the military response alone is no longer relevant, is no longer sufficient.

Mali, a peace of survival 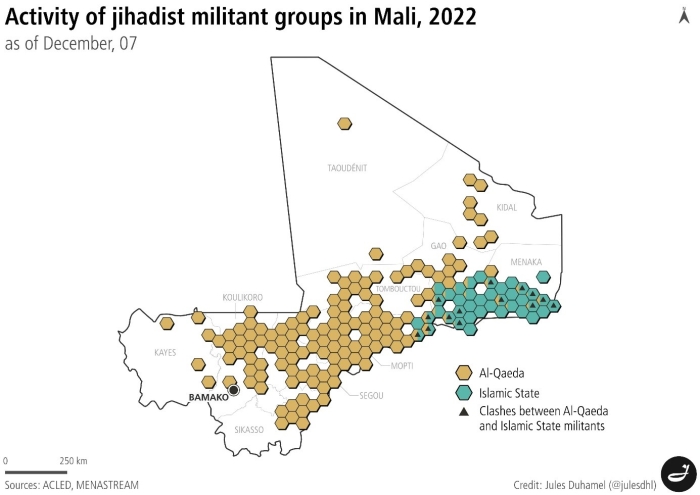 The security situation in Mali is very difficult to grasp, as the situations are so different in each zone, down to the smallest locality. It is a sort of patchwork where the state no longer reigns. In the Center, in the Mopti region, the inhabitants live in a climate of terror with clashes between the Fama, Wagner, and the Dan Ambassagou dozos, against the jihadists, but also against people suspected of collaborating with the JNIM. In other parts of the center, such as the cercle of Niono, what the peacekeeping mission in Mali, Minusma, calls in its latest report "survival pacts" have been established. In order to be able to continue to cultivate and therefore feed themselves, the population has pledged allegiance to the jihadist groups and their rules, women go to the fields veiled, the population pays zakat, etc. In this circle, the dozos have been very weakened, and the fighting with the jihadists has ended. It is a situation where, at the same time, the JNIM rules and the army patrols alongside Wagner's men. A sort of status quo, where everyone makes agreements with everyone else to get some peace after ten years of war.

In the Ménaka region, a stronghold of the Islamic State, an organization that unlike the JNIM does not seek the allegiance of the population, but wants to gain territory by practicing a scorched earth policy, the situation is nightmarish. Since March 2022, all the villages in this region have been wiped out, and the people who survived have fled to Algeria, Niger or the town of Ménaka, where the Minusma, the Malian army, is based and which cohabits with Wagner's mercenaries who very rarely leave their camp.

Towards a syrian scenario 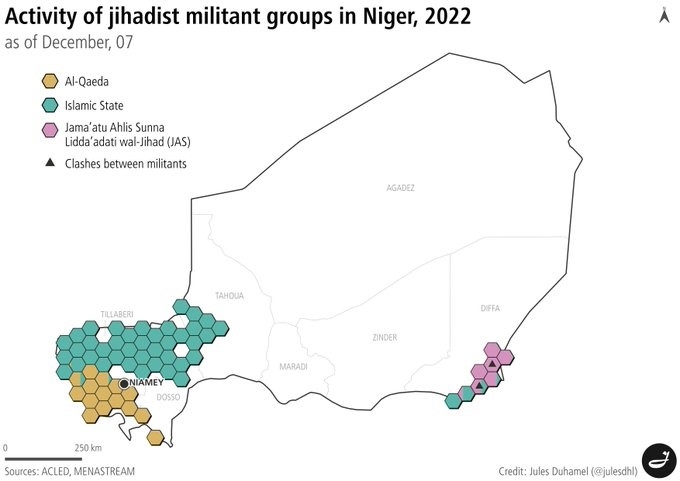 It is in this configuration, with increasingly fragile states, that a massive influx of foreign fighters has come to reinforce the ranks of the Islamic State. On November 24, the Malian Moussa Ag Acharatoumane, a member of the National Transitional Council (CNT) and secretary general of the Movement for the Salvation of Azawad tweeted: "Daesh: Saudis, Syrians, Iraqis, Kuwaitis, North Africans are flocking to the 3 borders area. A monster is being born before our eyes, the awakening will be difficult, our Sahelian authorities are called upon." Information, moreover, cross-checked during the last IVERIS trip to the Sahel.

Propaganda images circulated on social networks show an impressive gathering of these fighters, both in terms of numbers and equipment, pledging allegiance to the new caliph of Daech, Abu al-Hussein al-Husseini. The internationalization of the conflict in this region is thus a fact.

In passing, the armed groups, already very well off, will have no trouble equipping themselves, since, as IVERIS anticipated in May 2022, the arms delivered by Western countries to Ukraine have arrived in Africa. Nigerian President Muhamadou Buhari mentioned this on November 30 during his speech to the Lake Chad Basin Commission.

Some journalists and experts claim that these shots were taken in Mali, thus lending credence to the idea that the departure of Barkhane has allowed the Islamic State to strengthen. Except that, as the maps show, Daesh is certainly gaining a foothold in Mali, but also in Niger and Burkina Faso, precisely in this Tri-border area. (Historically, it first established itself in Niger and then spread to Mali and Burkina Faso)

The French army is present in Niger, as are the Americans, who have a drone base in Agadez and a CIA base in Dirkou. Germany, which has extended its military mission to May 2022, has deployed a team of trainers who are supervising a Nigerien special forces unit in the Tahoua region, a few kilometers as the crow flies from the said region. Italy, increasingly present in the Sahel, also has a contingent in Niger. With all the resources these states have at their disposal, how can they ignore the fact that the Islamic State is building a sanctuary in an area barely larger than Belgium? It is difficult to understand why everyone remains silent and inactive.

Is it a matter of very short-sighted and short-term calculations, which would consist of letting the Islamic State settle in so that it weakens the JNIM, with fighting between the two groups raging at regular intervals? Is it to show the authorities in Bamako that they have made the wrong choices and that without France's help the security situation will deteriorate further? Yet whatever the enmities, resentments, and geopolitical struggles, no one, and especially not the coastal countries of West Africa, has an interest in a collapse of Mali.

If Daesh were to declare a caliphate in the area, which given the many reinforcements coming from the Middle East is not an unthinkable scenario, we would then find ourselves in the Syrian configuration. As early as 2017, this situation was envisaged by the Pentagon and the US Senate. At the time in an article titled "The African Pivot," IVERIS wondered about the words of Senator John McCain: "The more successful we are in the Middle East, the more we will see the snakes move toward Africa and we will have to be ready to advise and assist those nations that are willing to work with us." Self-fulfilling prophecy?

Here we are. The snakes from Syria have arrived in the Sahel "a monster is being born before our eyes."