“Today the world finds itself facing the worst refugee crisis since the Second World War. And Europe finds itself struggling to deal with the high influxes of people seeking refuge within our borders” Dimitris Avramopoulos, Migration and Home Affairs Commissioner, Brussels, 14 August 2015, Speech to European Commission : "A European Response to Migration:Showing solidarity and sharing responsibility"

The recent flow of migrants to Europe remains at the core of EU agenda and has already become a highly sensitive political and public issue for both EU policy-makers and Member States leaders. The questions of security and sovereignty confronts those of integration and human rights' protection. Europe lived through the most vivid population movements in both the 20th and 21st century, and even before. For instance, Russians moved to Western Europe after the October revolution. Few years later, an exchange of populations took place between Greece and Turkey after World War I. After World War II, resettlement of the displaced people saw massive population movements. The decolonization process triggered movement of population from Africa, the Middle East and Southeast Asia to the former colonial powers. The 1990s and the collapse of the Yugoslavia followed by the ethnic conflicts added to the number of people seeking better life in Western Europe. Eventually, the two latest waves of the EU enlargement also let more people legally move and work in Western Europe. 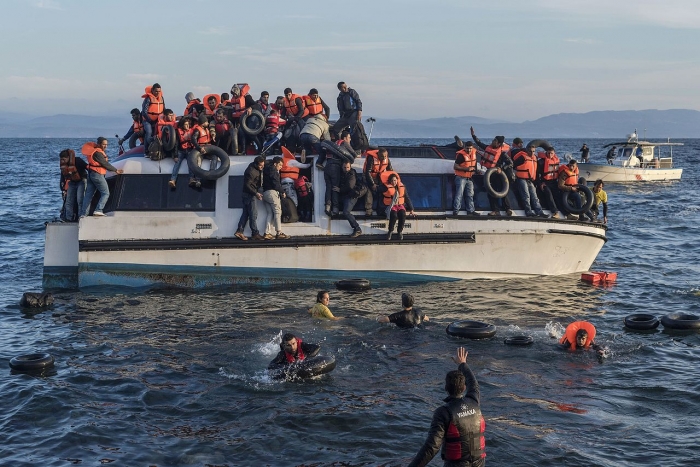 The recent flow of migrants to Europe remains at the core of EU agenda and has already become a highly sensitive political and public issue for both EU policy-makers and Member States leaders. The questions of security and sovereignty confronts those of integration and human rights' protection.

Europe lived through the most vivid population movements in both the 20th and 21st century, and even before. For instance, Russians moved to Western Europe after the October revolution. Few years later, an exchange of populations took place between Greece and Turkey after World War I. After World War II, resettlement of the displaced people saw massive population movements. The decolonization process triggered movement of population from Africa, the Middle East and Southeast Asia to the former colonial powers. The 1990s and the collapse of the Yugoslavia followed by the ethnic conflicts added to the number of people seeking better life in Western Europe. Eventually, the two latest waves of the EU enlargement also let more people legally move and work in Western Europe.

However, the EU appears to be overwhelmed and unprepared to the two enormous migration streams: one due to socio-economic reasons, mostly from Sub-Saharan Africa and the Balkans, and the other due to political conflicts, wars and failed states from Syria, Afghanistan, Iraq and Somali. It is obvious that the volume and complexity of migration flux to the EU in 2014, aggravated in 2015 and consequently in 2016 will have lasting social, economic and political consequences for the European Union itself as an institution and individual member – states. The EU is struggling to build up a coherent migration policy that would address both internal and external dimension of the crisis.

Firstly, the recent flow of migrants questioned the very idea of a borderless Europe and undermined the long-term commitment of member-states to the Dublin regulation [1] and the Schengen agreement.

Southern countries have become the first outposts of the considerable migration flow, and they lacked technical capacities to receive and process applicants. Therefore, they suspended de-facto the Dublin regulation and allowed migrants into western and northern Europe without registration. This situation has played in favor of applicants, who were more eager to apply for asylum in states that are more prosperous than in the countries of their first-entry. In response to the huge tide of migrants going deeper into the European continent, the other member-states called for the reinstatement of temporary border controls and for the enhancement of border security control to counter perceived security threats.

The current EU immigration and asylum system showed its shortcomings under the pressure of this huge and never-seen-before migration wave:

One of the main question is how to differentiate between all those new illegal arrivals. How to distinguish between economic migrants and those fleeing wars and death threats? How long such process can take?

Secondly, the migration crisis exposed the fragility of EU solidarity, which has always been more than the essence but also the cherished value of the integration project. Relocation measures established in two Council Decisions of September 2015, opened a new stage of political debate in which flexible solidarity stands versus mandatory relocation mechanism. The summit of EU 27 in Bratislava on 16 September, 2016 and the EU Commission latest progress report on the EU's relocation and resettlement schemes in September 2016 show that ‘relocation has to succeed' rather than ‘succeeds'. As per the report, only 5 651 applicants for international protection out of 160 000 asylum seekers have been relocated from Italy and Greece since the launch of the scheme.

The process is obviously at an embryonic stage with some countries like France (1 952 people), Netherlands (726 people), Finland (690 people) accepting most under the relocation scheme and others like Austria, Denmark, Hungary or Poland accepting none. What measures could trigger the political will, enforce the pledges taken, and lead the relocation scheme to success by September 2017? Moreover, how can one make the relocation mechanism work when a migrant chooses one country over the other due to friendlier asylum legislation or jobs' availability?

The last and not the least consequence of the migration flow to Europe is that it is force the debate on the nature of current migration influx and the means to tackle its causes. One can suppose that more than 1 million illegal migrants who have come to Europe will stay there, that is why the block's immediate response to crisis focused on how to process and integrate these newcomers. However, shouldn't there be greater emphasis on countries of origin and cooperation with major transit countries to improve their border control capacity? Finally, how to bring economic development, social stability and peace in both countries of origin and transit?

One should acknowledge that the EU's migration policy integrates gradually an external dimension. Several signs show this commitment. First, the EU has launched a naval operation (“EUNAVFOR Med” or “Operation Sophia”) against human-smugglers and trafficking networks in the south-central Mediterranean, and has developed a new European Border and Coast Guard. Second, the EU-Turkey Statement agreed on 18 March 2016, has unveiled a financial instrument for the Middle East and Africa. This new Partnership Framework on Migration pledges close to €8 billion over 2016-2020, to support several countries, such as Mali, Niger, Nigeria, Senegal, Ethiopia, but also Jordan and Lebanon. The EU Emergency Trust Fund for Africa and the EU Regional Trust Fund in Response to the Syrian Crisis are the main funding mechanisms.

However, in the light of the right –wing parties' rise, the unpredictable results of the elections in France and in Germany in 2017, and the securitization of the migration issue, one can question whether the EU should not focus more on internal aspects rather than the external context of migration, at least for the coming two years.

Volume and Geography on Migration Inflow

Unregulated migration and illegal EU border crossings has increased dramatically during the recent three years. More than the bold statement made by EU Migration and Home Affairs Commissioner, Dimitris Avramopoulos, figures speak clearly for themselves.

International Organization on Migration Displacement Tracking Matrix, reports that in 2015, 1.046 million people arrived in Europe, by land and sea.  Eurostat findings confirm this trend, adding some precision. The number of first-time asylum applicants in the EU-28 more than doubled from 563 thousand in 2014 to almost 1.26 million in 2015. The increase is mainly due to a higher numbers of applicants from Syria, Afghanistan and Iraq; and to a lesser extent from Albania, Kosovo, and Pakistan. In fact, the 2015 number of asylum applications within the EU-28 almost double the number recorded within the EU-15 in 1992.

Among the main migration routes, that according to EU Frontex agency encompasses eight variants, the Eastern Mediterranean route (from Turkey to Greece, Bulgaria and Cyprus) remains the most popular. The vast majority of migrants using this route end up on Greek islands, mostly on Lesbos, Chios and Samos. In total, 173,000 migrants crossed the border illegally via this route between January to September 2016. The three most represented nationalities were Syrians (81 390), Afghanis (42 053) and Iraqis (26 739).

This influx to Greece across the Aegean Sea steadily outstrip crossings via the other major migration route, the Central Mediterranean route. The latest is favored by migrants hoping to find jobs in France, who head towards the islands of Lampedusa and Malta. In 2015 Eritreans, Nigerians and Somalis accounted for the biggest share of the migrants making the dangerous journey via this route.

In 2015, asylum seekers' applications show that Germany was the preferred destination due its favorable migration policy and relatively healthy economy. A breakdown shows that Syrians choose Germany and Sweden; Afghans prefer Hungary and Sweden; and Iraqis headed to Germany, Finland and Sweden.

The recent migration flows generated political, economic and social reactions to the crisis. The integration of migrants, especially those coming from former European colonies, has always been an issue for Europe. At the core of current public discourse lie security concerns and the plight on public services, e.g. pressure on healthcare, social care and education system of accepting countries. This discourse is limited and a broader debate should engage as many domestic actors as possible, such as business, trade unions, NGOs. This debate need to be fed by scientific research and assessments. For instance, studies could show the labor gaps that might be fulfilled by newcomers. The other important part of the public discourse focuses on the role of police to maintain public order and to fight crimes regardless of the identity of the author. Finally, the EU member states might have to review and develop a new return management mechanism. By strengthening the Return Directive (directive adopted in 2008 for those who have been denied asylum status), the EU could develop a more balanced policy towards migrants applying for the first time or not. In this case, the EU will need to facilitate Readmission Agreements with third transit countries.

This new approach would call for a balance between European values, ideas of humanism, integration programs for migrants, and the necessity to minimize any potential security threats to receiving countries. Managing migration flow is about finding a new model for future EU development, and in this case, all aspects matter, from individual EU state policies on adaptation and integration to the solution of EU solidarity challenge. History has long shown that migration is a natural phenomenon with positive and negative aspects impacting upon economic development, regional stability and security. Therefore, solutions will never come from the decisions of a single though influential European actor, but rather from a collective effort to mitigate potential crises and to contribute to better allocation of public goods in the world.

About the author: Liubov Yaroshenko, expert at Russian Trade and Economic Development Council, PhD in Political Science, member of the Alumni Club of the Gorchakov Public Diplomacy Fund.