The future of Russian-Chinese cooperation

Recent Sino-Russian cooperation has contributed to solving emergent and long-standing issues such as the withdrawal of chemical weapons from Syria or reaching an agreement on Iranian nuclear programme. Is it the sign of an alliance between countries or the pragmatic convergence of interests?

It is indeed a convergence of interests. Or a ‘proximity' of approaches between two countries towards international and regional issues, as it is often referred to in official statements. This proximity impacts upon many ongoing issues pertaining to regional and global security. When it comes to China, one should not expect it to sacrifice its interests for the sake of others, even when China deals with its closest and highly-valued diplomatic partners. Beijing acts exclusively upon its pragmatic interests. 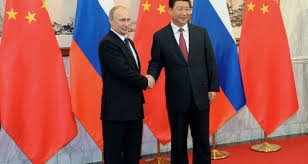 This brings the next question: how serious is the emergence of full military cooperation between Russia and China, a potential threat raised by NATO from time to time ?

The likelihood of a formal military alliance is rather low. China keeps on abiding by one of its fundamental foreign policy principles that is not step into alliances. This is where the major difference between China and the US, that have numerous allies all over the globe, lays. Beijing does not have any official ally. And it is unlikely that it would give up this principled approach to foreign relations.

Beijing does not see the advantage to take up responsibilities and to support other countries, including militarily. This is especially the case when China deals with Russia whose relations with the US and the West in general are at least very complicated at the moment. We should bear in mind that for Beijing, the relationship with the US as a sole superpower is the most important bilateral one in the world. And it is not in China's interests to bring one more contentious issue into the US-China relations by forming an alliance with Russia.

It is no secret that Syria attracts Uyghur terrorists. Would Beijing be ready to take part in military operations in the Middle East in the near future, to prevent terrorists from returning home?

Currently, there are serious grounds for predicting an increase in Chinese participation to the settlement of the crisis in the Middle East. First, PRC (the People's Republic of China) has major interests in the region that remains its main provider of energy resources. Second, over the past years, Beijing has clearly decided to gradually step away from another of its fundamental foreign policy approach: the non interference in the internal affairs of other countries. China for instance is increasing its participation in peacekeeping missions. Additionally, it announced the construction of their first-ever overseas military base in Djibouti, at the beginning of the year. Amongst others, this base will give China the means to react quickly to events unfolding in the MENA region. Regarding the Uyghur terrorists supposedly based in Syria, China, to the contrary, expects them to be extradited back to China.

Many experts consider that China has achieved considerable success on the disputed territories in the South China Sea. Can we speak of an American omission?

I am not sure what success we are talking about. The situation is as complex as it was in 2010 when disputes in the South China Sea escalated.  Of course, over the past 6 years Beijing has undertaken numerous unilateral measures aimed at manifesting China's sovereignty over the disputed islands. For instance, it has built artificial islands in the disputed territories, increased the number of patrolling ships and took a series of administrative measures. Nonetheless, China did not manage to enforce its rights over those territories in front of the international community or its neighbours. That's why, we can not talk about success. Neither can we say that the US are ignoring the issue of the South China Sea. On the contrary, American involvement in this issue brought about a new level of confrontation in the region in 2010. Since then, Washington has closely followed the situation there.

Recently, China and Russia carried out joint military exercises in the South China Sea. Is it an indirect support of Moscow to Beijing's position on the disputed territories?

It is hard to speak about support, even an indirect one. Of course, over the past half a year we observe some changes in Moscow's position on the South China Sea issue. Previously, RF (the Russian Federation) displayed indifference towards this issue, it was clearly of minor importance to Russia. In 2012, for example, to China's displeasure, Russia's Gazprom even was in talks with Vietnam on joint energy exploration in disputed waters in the South China Sea. Yet, this policy line slightly alters nowadays. As we know, Vladimir Putin recently expressed himself on the international arbitration initiated by the Philippines against China on the disputed islands. And now, Russia is holding joint exercises with China in the South China Sea…. The Russian political leadership was clearly aware of the symbolism that those exercises would carry. We cannot deny that the Russian position has changed somehow, but still it is not a support to Beijing on the issue of disputed territories.

Is there any chances of seeing military cooperation between Russia and China within the SCO (Shanghai Cooperation Organisation)?

Russia and China, along with other members of the SCO, regularly carry out joint multilateral anti-terrorist exercises. The anti-terrorist component of the military cooperation is reasonably strong, and most certainly will remain strong.
Beyond the fight against separatism, extremism and terrorism, the cooperation in the military realm unlikely to extend to regional security and stability. The SCO enlargement, with Pakistan and India becoming members last June, partially cooled China's enthusiasm in the SCO and in developing stronger military cooperation within the organization.

In the near future, should we anticipate some competition between Russia and China in the defense industry?

Yes, of course. China is confidently making its way to a leading position on the world arms and military equipment market. Between 2011 and 2015, Beijing moved to the third position just after the US and Russia. The export markets for Russian and Chinese arms are in many cases the same. That speaks already about existing competition.

Does China support Russia on the recognition of Crimea in the context of the Taiwan issue?

You are right in putting the issue of Crimea and Taiwan in parallel. You could have added the Uyghur and Tibet problems on Chinese plate. Indeed, taking into account the territorial integrity issues China faces the question of support to Russia on Crimea is not an easy one for the Chinese authorities. Especially in light of the issue of Taiwan, where a law on referendum was enacted in 2003. Today, Taipei has an extended experience in holding referendums and a referendum on the issue of the island's independence would be Beijing's worst nightmare. In such a context, the fact that at the end of March 2014 China abstained from voting the UN resolution on Ukrainian territorial unity declaring Crimea's independence referendum null and void speaks for itself. Yet, we cannot regard this fact as granting support to Russia. It is just a sign of China's neutrality in the Russia-West confrontation.

Within the cooperation framework with the Russian Fund A. Gorchakov